The Fourth of July is a truly special day and means a lot to most American citizens. bit for those that aspire to become American one day, this day means so much more. This is a great article posted on Huff Post today, read more.

When I was an illegal immigrant I celebrated Independence Day as if it were a spiritual holiday. In the charged rhetoric about Latino immigration our national conversation could benefit from re-imagining our unalienable rights. Our values and moral compass would be deepened by viewing the pursuit of life, liberty and justice through the lens of our mutual pursuit of inter-dependence.

The ideal and promise of equality is more than a holy grail. Our founding document galvanizes the aspirations and hopes of immigrants and new citizens. We believe in the promise. Like U.S. citizens, we do not wish for a promised land in some after-life. We expect to be full citizens, inter-dependent with Americans of every stripe in the present, rather than cheap shots for uncourageous hapless leaders.

Foreigners often observe that Americans are self-absorbed and engaged in the enterprise of self. In contrast to many places around the world, from Iran to North Korea, the individual pursuit of life, liberty and happiness is a cherished defining value of being an American. The Founding Fathers had a perspective much larger than libertarianism or narcissism. 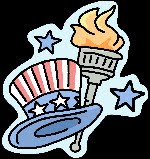