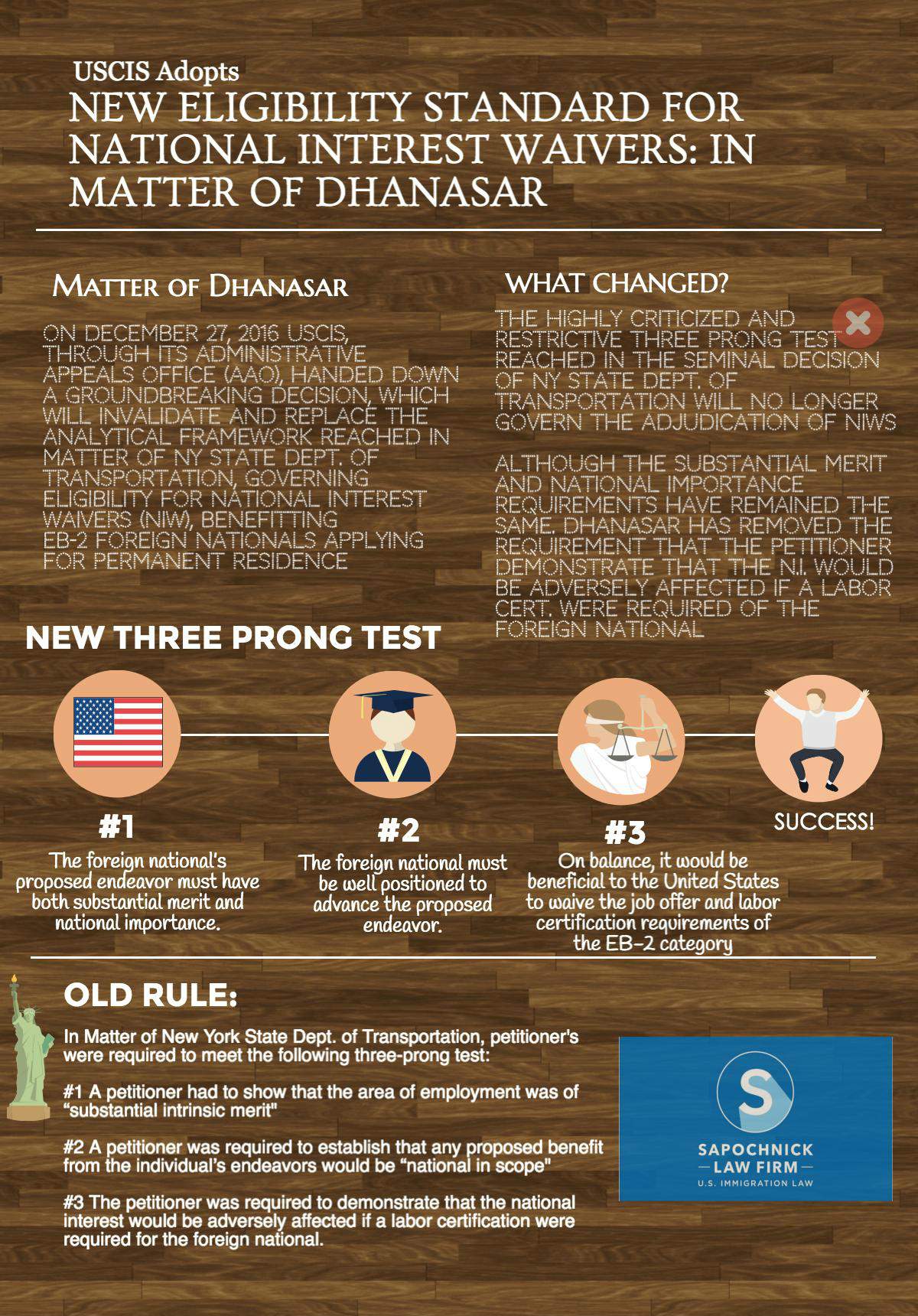 On December 27, 2016 in Matter of Dhanasar, 26 I&N Dec. 884 (AAO 2016) the USCIS Administrative Appeals Office (AAO) handed down a groundbreaking decision which has changed the analytical framework for determining eligibility of national interest waivers. This new decision will affect foreign nationals who are pursuing a green card based on employment in the EB-2 category, and who are eligible for a “national interest waiver.”

The national interest waiver is a discretionary waiver of the job offer and labor certification requirement made possible by subparagraph (A) of section 203(b)(2) of the Immigration and Nationality Act. This section of the INA states that the Secretary may, when it deems it to be in the national interest of the United States, “waive the requirements of subparagraph (A) that an alien’s services in the sciences, arts, professions, or business be sought by an employer in the United States.”  In addition to meeting a three-prong test of eligibility, to obtain a national interest waiver, the foreign national must be a member of a profession holding advanced degrees or their equivalent or prove that “because of their exceptional ability in the sciences, arts, or business they will substantially benefit prospectively the national economy, cultural or educational interests, or welfare of the United States.”

Without this discretionary waiver, EB-2 applications must be accompanied by a labor certification and their employer must go through the process of advertising the position to prove to immigration that there are no other applicants who are qualified, willing, and able to fill the position that the foreign national is expected to fill. Employers must also meet prevailing wage requirements as established by law. Establishing the national interest waiver in other words made it easier for qualifying foreign nationals in the EB-2 category to skip the job offer and labor certification requirement, streamlining their path to permanent residency.

The test of eligibility under NYSDoT established the following three-prong framework:

The new AAO decision in Matter of Dhanasar will invalidate and replace the three-prong test established by Matter of New York State Department of Transportation for a more flexible standard that will allow a broader population of foreign nationals in the EB-2 category to qualify for the discretionary national interest waiver. Under the new test, the EB-2 petitioner must meet all criteria established by the new test by a preponderance of the evidence. This standard of proof establishes that the requirements must be proven by evidence that is the most convincing, and not by sheer volume of evidence. USCIS must determine whether on the whole the petitioner demonstrated by strong evidence that the requirements for the discretionary waiver were met. This standard of proof is therefore more flexible since it only requires the evidence to be convincing.

The NEW three prong-test established by Matter of Dhanasar is as follows:

The new three-prong test established by Matter of Dhanasar is a very exciting and progressive step in the right direction for the EB-2 category. The previous national interest waiver standard made it very difficult for entrepreneurs to obtain the benefit of foregoing the job offer and labor certification requirement. We expect that with this new flexible standard, many more foreign nationals will become eligible for the national interest waiver. Although the process is discretionary in nature, petitioners will now be able to demonstrate their eligibility by a preponderance of the evidence, providing strong and convincing evidence that their employment is of national importance.