According to a recent update from AILA, DHS is in the process of changing its policy on minors being charged with making false claims to U.S. citizenship. Details are limited at this time.

We understand that DHS has begun implementation of its new policy, which AILA believe will protect certain minors from a false claim charge, and that written guidance will be forthcoming. The Department of State has indicated that it will follow the new DHS policy. We will continue to monitor this closely and will post additional details as they become available.

A foreign national who falsely represents him– or herself as a US Ciitizen in order to obtain a benefit under Immigration Law or any other federal or state law is inadmissible. There is no waiver available.

However, as with most rules, there are exceptions. For instance, a foreign national is not inadmissible under this provision if his or her parents are USCs; the person permanently resided in the United States before the age of 16; and the person reasonably believed at the time the misrepresentation was made that he or she was a USC.

Additionally, before IIRAIRA law changes, falsely claiming U.S. citizenship did not trigger a separate ground of inadmissibility. Rather, the foreign national was simply inadmissible under the rules regarding misrepresentation, which, as noted above, were waiveable under INA §212(i). Today, false claims made before the effective date of IIRAIRA (September 26, 1996) still may be waived.

If it can be established that the false claim was not made for “any purpose or benefit under INA or any other federal or state law,” then the ground of inadmissibility may not be triggered. Similarly, a foreign national who falsely claims to be a U.S. national rather than a USC, may escape exclusion, thereby eliminating the need for a waiver. Please consult an experienced attorney if you have questions about claim matters.

The new policy may be important also to DACA applicants that are currently facing claim of US Citizenship charges. 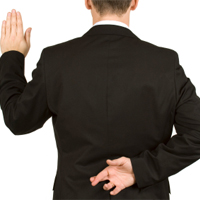