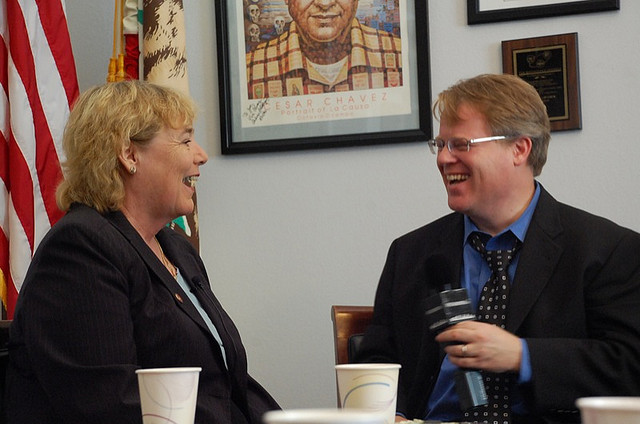 Last Monday, April 28, Congresswoman Zoe Lofgren, U.S. Representative of California’s 19th district, introduced what is known as a Private Relief Bill to Congress in an effort to reunite fellow DREAMer and San Jose State University college student, David Gonzalez, with his mother Antonia Aguilar. The Private Relief Bill, which is introduced once or twice during each congressional session, is intended to bring congressional awareness to the plight of a specific person, whose situation demonstrates a ‘compelling humanitarian reason’ which would allow them to remain in the country legally.

Ms. Aguilar found herself in the position of being deported from the United States after returning from a trip to Mexico to see her dying father for the last time. David Gonzalez is only one of three of her children, and like thousands of other young men and women across the United States, has had to take on the parental role of raising his younger siblings while tending to his scholarly obligations.

After meeting with the young man and hearing his story, Congresswoman Lofgren echoed the same sentiments that millions across the country have expressed saying, “Sadly, this story is not unique. Our dysfunctional immigration system continues to rip families apart, separating husbands from wives and children from their parents. When our immigration system fails families I step in to do as much as I can….. Even extraordinary efforts on behalf of individuals are often not enough because our immigration system is fundamentally broken and will continue to be broken until we reform our immigration laws.”

Our clients have voiced the very same frustration with the current system in place, after discovering that there are very few options available to them stemming from an outdated immigration policy and unresponsive government. We have felt impotent at times in being able to offer our clients only our humble condolences. The current outdated system has undoubtedly gone on for far too long and has negatively affected the lives of so many. There must be reform to a system that has disappointed and left so many in the dark, when the current administration has promised these same individuals so much.

Our office will continue to keep you updated on the most recent developments related to immigration reform.