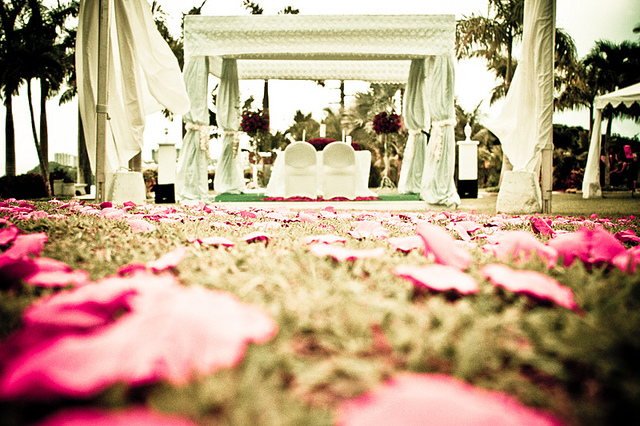 Getting married is an important step in everyone’s life.  For some, it is a well-planned event. For others, it is a spontaneous decision. However, for those foreign nationals who are coming to the U.S. to marry U.S. citizens, it needs to be a very thought-through decision because if they marry too fast, it can result in big problems at the time they apply for the green card.

Whenever you come to the U.S. as a visitor, you represent to the immigration officer at the time of visa application and at the port of entry that you do not intend to reside in the U.S. permanently and that you intend to depart the U.S. after a short-term visit. Even if you are not asked a specific question by a consular officer or customers and border agent at the port of entry on whether you want to stay in the U.S., by way of coming into the U.S. with a nonimmigrant visa you show your nonimmigrant intent.

Marrying a U.S. citizen soon after entry into the U.S. and applying for a green card is inconsistent with the representations you made to the consular officer and to the customs and border agent concerning your intent in coming to the U.S. Thus, if you marry a U.S. citizen soon after coming to the U.S., you may be found to have a preconceived intent to immigrate, which may then cause problems at the time you apply for the green card.

So, how does USCIS determine whether there was a preconceived intent to immigrate and what are the consequences?

To address the problem with the preconceived intent and to determine when the foreign national’s actions within the U.S. are inconsistent with the nonimmigrant representations, resulting in the charge of misrepresentation, the Department of State has developed the so-called “30/60-day” rule designed for the consular posts but often followed by USCIS in adjudication of green card applications. See 9 FAM 40.63, Note 4.7, Interpretation of the Term “Misrepresentation”, Applying the 30/60 Day Rule.

Actions within 30 days of entry

If the actions inconsistent with the manner of entry occur more than 30 days but less than 60 days after entry into the U.S., there is a rebuttable presumption of misrepresentation. In that case, countervailing evidence may be presented by the foreign national to show that there was no intent to misrepresent. If the consulate is not persuaded, the foreign national may seek an advisory opinion from DOS. See 9 FAM 40.63 N4.7-3

Actions more than 60 days after entry

If the actions occur more than 60 days after entry into the United States, it does not raise the misrepresentation or preconceived intent concerns. See 9 FAM 40.63 N4.7-4

Preconceived Intent to Remain in the U.S. in Adjudication of Adjustment of Status

Foreign national seeking adjustment of status must be able to show that there was no immigrant intent at the time of nonimmigrant visa application or entry into the U.S.

It is worth noting that 30/60 rule is the DOS rule applied by consular posts at the time of visa issuance. USCIS does not contain similar provisions but in practice USCIS tends to use this rule as guidance during adjudication of adjustment of status application when there is an issue with the preconceived intent or misrepresentation. You should keep this rule in mind before you decide to apply for adjustment of status in the U.S.

The decision on granting adjustment of status to permanent resident (green card) is discretionary in nature. See AFM 23.2(d).

In context of a preconceived intent to immigrate, especially if there are any other adverse factors present, USCIS may find that favorable exercise of discretion is not warranted, thus denying the adjustment of status.

At the time USCIS adjudicates your adjustment of status (green card) application, the immigration officer may inquire further into the manner you came into the U.S. and the circumstances surrounding your sudden marriage. If the immigration officer believes that you intended to immigrate at the time you entered the U.S., it means that you have misrepresented your intentions and USCIS may use its discretion in either denying adjustment of status or asking to submit a waiver.

One of the ways to prove your nonimmigrant intent is to show overwhelming evidence that you did not want to immigrate to the U.S. at the time of visa application or entry and that your intent was formed after you came to the U.S.

Helpful evidence to show your nonimmigrant intent includes documentation proving ties with your home country, which you had no intention to abandon. You can provide your employment records showing that you have a job back home, lease agreements or mortgage documents showing existence of property back home, evidence of foreign assets, school records, evidence of foreign debts, bank accounts, or any other proof that you intended to return to your home country after a short trip to the U.S.

If the immigration officer finds that you had a preconceived intent to remain in the U.S. and misrepresented yourself, you may be required to file a waiver of inadmissibility, referred to as “I-601 waiver,” by which you would need to show extreme hardship to your U.S. citizen or Lawful Permanent Resident spouse or parent. This process is designed to waive many grounds of inadmissibility including misrepresentation ground if there is extreme hardship to a qualifying relative. If the waiver is approved, immigration officer will proceed with the adjudication of your green card case.

Adjustment of Status to permanent resident is an important step and should not be taken lightly. Before you decide to get married and apply for the green card, talk to an immigration attorney to discuss any concerns.