In the efforts to reduce its costs associated with issuing paper Form I-94, United States Customs and Border Protection (CBP) has announced plans to eliminate Form I-94, Arrival/Departure Record.

As another reason for eliminating Form I-94, CBP has noted that it already has access to the data gathered on Form I-94. Aliens provide the information when submitting an application for a nonimmigrant visa at a U.S. consulate. In addition, information is provided to CBP through the Advance Passenger Information System (APIS). APIS is a web-based system used by commercial carriers and the private aviation community to electronically provide required information to CBP such as notices of arrival and/or departure and traveler manifests (crew and passenger).

Form I-94 plays a central role in documenting proper admission and maintenance of status and is used by a variety of entities ranging from U.S. Citizenship and Immigration Services (USCIS) to state motor vehicle bureaus to verify aliens’ immigration status. It remains to be seen how these entities will be handling verification of lawful status without Form I-94.

Key points about implementation procedure are summarized below.

Admission Stamp will be used instead of Form I-94

CBP’s plans call for issuing an admission stamp in the passports of nonimmigrant aliens instead of paper Form I-94. The stamp will include a handwritten notation indicating the status and authorized period of stay, similar to procedures now utilized for travelers under the Visa Waiver Program.

Locations where Form I-94 will be eliminated

Nonimmigrant aliens arriving at air and those sea ports using APIS will no longer receive a functional Form I-94. During the transition period, CBP is planning to continue issuing a paper Form I-94 to arriving nonimmigrant aliens, even though the form would have no legal significance. That is, the control number on Form I-94 would not be a valid number, and it would not be connected to any record relating to the alien.

Impact on other programs

At this time, we can only speculate about the practical consequences of CBP creating an electronic record of admission while simultaneously furnishing paper Forms I-94 that have an invalid number unrelated to an alien’s actual record of admission.

Many of the petition and application forms promulgated by the U.S. Citizenship and Immigration Services (USCIS) to request immigration benefits, such as Forms I-129, I-130, I-539, etc., ask for a Form I-94 number. CBP has indicated that it is in communication with USCIS about its plans to eliminate Form I-94. There are no known plans, however, for USCIS to begin replacing existing forms to reflect this change. It also is unclear whether USCIS will continue to issue Form I-797, Notice of Action, approving an application for change or extension of status with a Form I-94, and if so, whether the form number will be connected to the actual record of admission.

The employment eligibility and identification process also will be affected by the elimination of Form I-94. Currently 8 CFR §274a.2(b)(1)(v)(A)(5) authorizes employers to accept a foreign passport and a properly endorsed Form I-94 or Form I-94A as proof of employment eligibility and identification for purposes of completing Form I-9. Regulations, I-9 instructions, and E-Verify rules will need to be revised to reflect the elimination of Form I-94.

CBP reports that it has already engaged in discussions with state motor vehicle bureaus and Social Security Administration to implement the changes related to elimination of Form I-94.

The incidence of CBP database errors is expected to be reduced with the creation of an electronic nonimmigrant alien admissions process. The database will be automatically populated with data provided in the nonimmigrant visa application and in APIS. It appears, however, that nonimmigrant alien category and admission dates will still be made in a passport by hand. Errors are inevitable.

The CBP Deferred Inspection procedure will remain the point of contact to correct admissions errors. 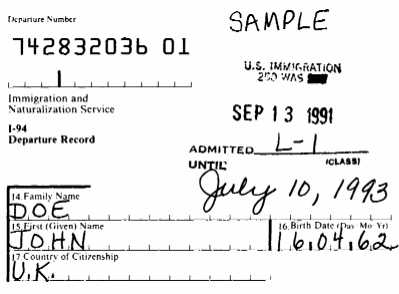