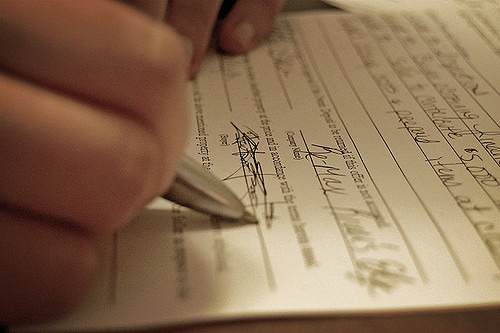 On December 28, 2016, the Department of State announced that original or “wet ink” signatures are no longer required on Form I-864 Affidavit of Support for immigrant visa petitions. This new measure also applies to I-864 supplements such as the I-864A, I-864W, and I-864EZ. Beginning January 1, 2017 the National Visa Center will begin to accept photocopies and scans of signed I-864 affidavit of support forms. The I-864 will still need to contain the affiant’s signature, however the signature no longer needs to be a “wet ink” signature. Typed names and electronic signatures are not acceptable. Petitioners will be required to submit an amended I-864 form to the National Visa Center if the sponsor’s name and personal information is missing and there is no signature or missing pages. Petitioners who will need to send an amended I-864 will receive a “checklist” containing the information that must be corrected on form I-864. If you receive a checklist letter prior to January 1, 2017 asking for an original signature on form I-864 please contact the National Visa Center.

Such requests will contain the following language:

[ x ] Item 6.a. You must sign the form and your signature must be original (in ink).

These improvements will simplify the immigrant visa “consular processing” by streamlining the submission of financial evidence in support of an immigrant visa application. The Department of State hopes that this new measure will reduce the amount of immigrant visas rejected at the interview stage. The NVC will continue to use an assessment type of letter to address other inconsistencies and errors found on the I-864 form. This assessment letter indicates which issues if any appear on the affidavit of support which could potentially delay the adjudication of the immigrant visa petition. Typically, this letter will indicate either that the sponsor has completed the form incorrectly or did not provide sufficient financial documentation in support of the affidavit of support. For example, if the petitioner does not meet the income requirement based on their household size, the assessment letter will indicate that more evidence is needed to establish that the income has been met, or a joint sponsor will be required. The assessment letter asks the petitioner to correct the issues before the immigrant is scheduled for their immigrant visa interview at a U.S. Consulate or Embassy abroad. If NVC sends an assessment letter, follow the instructions on the letter. Typically, the immigrant is instructed to bring a corrected affidavit of support to the interview with the suggested documents.

What is the Affidavit of Support?

The Affidavit of Support (USCIS Form I-864) is a form that is required for all immediate relatives of U.S. citizens and lawful permanent residents, (parents, spouses, and unmarried children under the age of 21, including orphans) and other relatives who qualify for immigration to the United States under one of the family-based preferences either through adjustment of status (where the intending immigrant is lawfully present in the United States) or consular processing (where the intending immigrant is residing abroad). An affidavit of support (USCIS Form I-134) must also be filed for alien fiance/e’s of US citizens who plan to enter the United States on a K visa. An affidavit of support is not required for an immigrant who is self-petitioning for immigration benefits because they are the battered spouse or child, or the widow/widower of a U.S. citizen or legal permanent resident.

When the petitioner signs the affidavit of support, they are declaring themselves the sponsor of the intending immigrant(s). On an affidavit of support form, petitioners must prove that they can financially support the intending immigrant. Petitioners filing an I-130 petition to allow their relative to apply for an immigrant visa through “consular” processing must submit this form to the National Visa Center along with supporting evidence proving that they meet the income requirements such as copies of their 1040 federal income tax return, W2s, recent paystubs, and employment verification letter. Petitioners must submit an Affidavit of Support no matter their level of income. Petitioners must meet a minimum income level. Petitioners who cannot meet this level, which is called the Federal Poverty Guidelines have two choices: 1) find a joint sponsor who meets the income requirement and will agree to financially support the visa applicant or 2) use your assets to supplement your income. Additional financial sponsor must also sign and complete an affidavit of support, provide proof of income, and proof of legal status in the U.S.

When applying for consular processing, first the Form I-130 is filed, and then the I-864 is later mailed to the National Visa Center.

The affidavit of support is a legally enforceable contract with the United States government. The affidavit of support ensures to the United States government that your relative/intending immigrant(s) will not become a financial burden on American taxpayers should they fall into financial hardship. A legal permanent resident cannot seek local, state, and government benefits except for Medical and Medicaid. If you sponsor a legal permanent resident who later seeks government assistance, you as the sponsor are liable and responsible for reimbursing that agency for monies owed.

Please visit our website for more information about the affidavit of support and poverty guidelines.

To learn more about what financial documents are required for consular processing please click here.