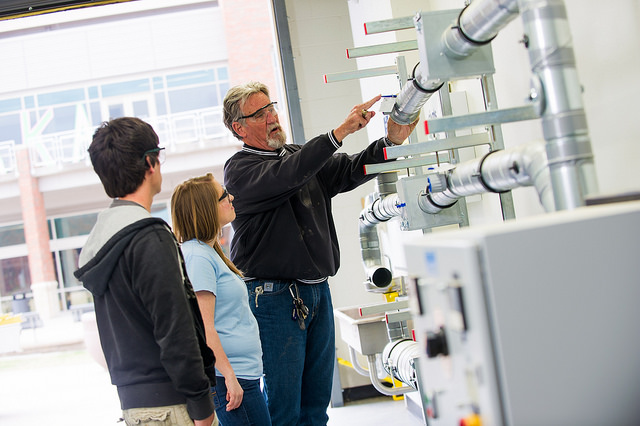 For many years, it has been unsettled in the law and practice whether a change in H-1B employee’s job location is considered to be a “material change” in the terms of employment, requiring filing of an H-1B amendment petition.

According to USCIS unofficial guidance (Letter from Efren Hernandez, Director Business and Trade Branch of USCIS, to Lynn Shotwell, Am. Council on Intl’s Pers., Inc., dated October 23, 2003), an amended H-1B petition was not required if the only change was in the location of employment and if the Labor Condition Application (LCA) was filed for the new job location prior to the employee’s move.

Despite that, we have heard reports of recent USCIS site visits to the places of H-1B beneficiaries’ employment, which resulted in the revocation of H-1B approvals if USCIS could not find the employee at the job location stated on the H-1B petition despite a valid LCA filed prior to the employee’s move.

This uncertainly was troubling as USCIS refused to issue any further clarifications or policy changes.

On April 9, 2015, Administrative Appeals Office (AAO) has issued a decision in Matter of Simeio Solutions, LLC, 26 I&N Dec. 542 (AAO 2015) that finally put an end to the uncertainty surrounding the change in employees’ job location. The decision has been designated as a precedent and will be followed by USCIS in the H-1B adjudications and will be used by the consular officers during visa interviews.

In this precedent decision, the AAO revoked H-1B approval, finding there was a material change in beneficiary’s employment due to relocation to areas not covered by the original LCA and that an amended or new H-1B petition was required.

Facts of the Case

When H-1B Amendment is not required

An important note is that the AAO decision confirms that if there is a worksite location change to a new area covered by the same LCA, then the requirement for an H-1B amendment would not apply.

When filing of the new LCA is not required:

When an H-1B employee is moved to a new jobsite, it is important to review the LCA to determine whether it covers the new site or whether a new LCA is needed.

When an H-1B employee is moved to a new worksite not contemplated at the time of filing the LCA, but which is within the “area of intended employment,” a new LCA does not need to be filed as long as the employer complies with the DOL’s posting requirements and presents the LCA for public examination at the new place of employment. 20 CFR 655.734(a)(2)

In addition, normally, if the new job location is located within the same MSA (metropolitan statistical area), it is considered to be within the area of intended employment, and the new LCA is not required.

If the H-1B employee moves to a new worksite within the area of employment, but the LCA is not posted on or before the employee starts working there, then a new LCA and an H-1B amendment petition must be filed. 20 CFR 655.734(a)(2).

Under certain circumstances, an H-1B employee may be given a short-term reassignment to a worksite not covered by the LCA without the employer’s filing of another LCA.  20 CFR 655.735(a). The employer needs to comply with all conditions imposed or else must file another LCA, with all related compliance. Those conditions are:  20 CFR 655.735(b),(c).

–        The prevailing wage or actual wage (whichever is higher) at the short-term worksite,

–        The actual cost of lodging for both workdays and non-workdays, and

–        The actual cost of travel, meals, and incidental expenses for both workdays and nonworkdays.

–        Maintains an office or workstation at the permanent worksite,

–        Spends a substantial amount of time at the permanent worksite in a one-year period, and

–        Has a U.S. residence or place of abode located in the area of the permanent worksite.

However, if the new LCA is filed, the employer will also need to file the H-1B amendment, which also comes with extra expenses. In situations like these, the employers should evaluate the pros and cons of each option in order to comply with the DOL and USCIS obligations.

According to the Department of Labor regulations, 20 CFR 655.715, certain locations where the employee may perform work are not considered to be new “worksites” and therefore the filing of the new LCA or the amended H-1B petition is not required if either (i) or (ii) is present:

(i) Employee developmental activity. An H-1B worker who is stationed and regularly works at one location may temporarily be at another location for an employer-required developmental activity such as a management conference, a staff seminar, or a formal training course (other than “on-the-job-training” at a location where the employee is stationed and regularly works). For the H-1B worker participating in such activities, the location of the activity would not be considered a “place of employment” or “worksite,” and that worker’s presence at such location–whether owned or controlled by the employer or by a third party–would not invoke H-1B program requirements with regard to that employee at that location. However, if the employer uses H-1B nonimmigrants as instructors or resource or support staff who continuously or regularly perform their duties at such locations, the locations would be “places of employment” or “worksites” for any such employees and, thus, would be subject to H-1B program requirements with regard to those employees.

(ii) Particular worker’s job functions. The nature and duration of an H-1B nonimmigrant’s job functions may necessitate frequent changes of location with little time spent at any one location. For such a worker, a location would not be considered a “place of employment” or “worksite” if the following three requirements are all met–

(A) The nature and duration of the H-1B worker’s job functions mandates his/her short-time presence at the location. For this purpose, either:

(1) The H-1B nonimmigrant’s job must be peripatetic in nature, in that the normal duties of the worker’s occupation (rather than the nature of the employer’s business) requires frequent travel (local or non-local) from location to location; or

(2) The H-1B worker’s duties must require that he/she spend most work time at one location but occasionally travel for short periods to work at other locations; and

The DOL regulations provide the following examples of “non-worksite locations” based on the worker’s job duties:

A computer engineer sent out to customer locations to “troubleshoot” complaints regarding software malfunctions; a sales representative making calls on prospective customers or established customers within a “home office” sales territory; a manager monitoring the performance of out-stationed employees; an auditor providing advice or conducting reviews at customer facilities; a physical therapist providing services to patients in their homes within an area of employment; an individual making a court appearance; an individual lunching with a customer representative at a restaurant; or an individual conducting research at a library.

In contrast, the following are examples when the place of employment will be considered a “worksite” for the purposes of the DOL regulations:

A computer engineer who works on projects or accounts at different locations for weeks or months at a time; a sales representative assigned on a continuing basis in an area away from his/her “home office;” an auditor who works for extended periods at the customer’s offices; a physical therapist who “fills in” for full-time employees of health care facilities for extended periods; or a physical therapist who works for a contractor whose business is to provide staffing on an “as needed” basis at hospitals, nursing homes, or clinics.

Whenever an H-1B worker performs work at a location which is not a “worksite”, that worker’s “place of employment” or “worksite” for purposes of H-1B obligations is the worker’s home station or regular work location. The employer’s obligations regarding notice, prevailing wage and working conditions are focused on the home station “place of employment” rather than on the above-described location(s) which do not constitute worksite(s) for these purposes.

When H-1B Amendment is required

H-1B amendment is required when there is a change in the place of employment to geographical areas requiring filing of a corresponding LCA (except the circumstances described above).

Moves beyond the area of intended employment. If an H-1B employee is moved to a new worksite that is outside of the originally contemplated area of intended employment, then a new LCA and H-1B amendment petition is required. So, if the employee is moved to a different MSA or if the new job location is not within the normal commuting distance from the previous place of employment, and if the short-term placement rules or worksite rules do not apply, this constitutes material change in the terms and conditions of employment, which requires H-1B amendment filing and additional examination by USCIS.

Tips and Pointers for Employers:

According to the AAO decision, the H-1B amendment is required if the change in the place of employment was to a geographical area requiring a corresponding LCA be certified. Thus, the first step for the employer is to figure out whether a new LCA filing is required or not following the short-term placement rules above, non-worksite locations, or the moves within the same MSA or within the normal commuting distance.

The AAO decision did not clarify whether the H-1B amendment filing is required prior to the move of the employee to the new workplace but looking at H-1B regulations as a whole, you have to notify USCIS immediately if there is a change in the terms and conditions of employment. It is the best practice for employers to file the amendment before the employee’s move. If the employee has already moved to the new location, the employer should proceed with the filing as soon as practically possible.

Our office would be happy to assist the employers in preparing LCA and H-1B compliance files when the amendment is not required and prepare the amendment petitions in accordance with the AAO precedent decision. For any questions, please do not hesitate to contact our office.