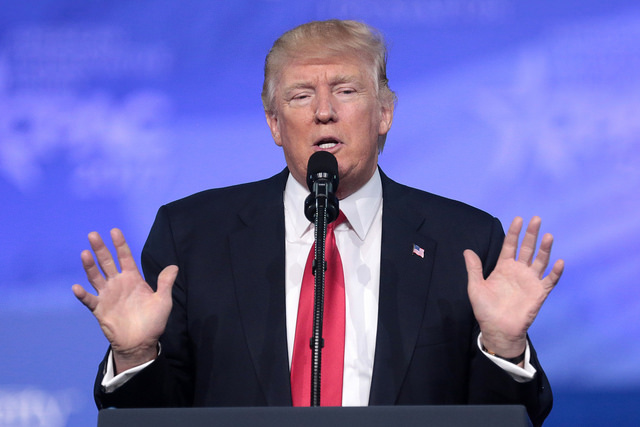 On Tuesday, February 28, 2017 the President of the United States Donald Trump addressed a joint session of congress for the first time ever delivering a unifying message to the American people. In his speech Donald Trump softened his stance on immigration while at the same time remaining true to his campaign promises.

On the topic of immigration, Donald Trump first discussed the creation of a Task Force to Reduce Violent Crime headed by the Department of Justice. Additionally, he stated that under his orders, the Department of Homeland Security, and Justice, the Department of State and Director of National intelligence will implement a plan to combat organized crime and the war on drugs. Trump pledged that he would work to dismantle criminal cartels and prevent them from bringing drugs into the country.

Second, Trump promised to keep his campaign promise to enforce the immigration laws of the United States and increase border security to “restore integrity and the rule of law at our borders.” He added, “We want all Americans to succeed, but that can’t happen in an environment of lawless chaos.”

Third, Trump called for the construction of a wall along our Southern border with Mexico to deter undocumented immigrants from entering the United States and to deter drug dealers and criminals from entering the United States and committing acts of violence. To his critics, Donald Trump posed the following question, “What would you say to the American family that loses their jobs, their income, or their loved one because America refused to uphold its laws and defend its borders?”

Fourth, he promised that his administration would serve, protect, and defend American citizens and take a stand against “radical Islamic terrorism.” Trump had criticized his predecessor Barack Obama for failing to recognize the link between terrorism and Islam. He has consistently taken the position that terrorism stems from radical Islamic beliefs.  He stated that we must protect our nation from foreign born terrorists who enter our country to commit terrorism-related offenses and prevent attacks like the World Trade Center, and those that have occurred around the world in countries like France, Belgium, Germany, and Turkey. Trump justified his position stating, “It is not compassionate, but reckless to allow uncontrolled entry from places where proper vetting cannot occur.” Trump was expected to emphasize the dangers of radical terrorism and the need for increased vetting, given that the Ninth Circuit Court of Appeals refused to implement his Executive Order “protecting the nation from foreign terrorists.” Trump has taken the position that in refusing to enforce the Order, the Court has undermined the security of our nation. Trump made his message very clear stating “We cannot allow a benchhead of terrorism to form inside America. We cannot allow our nation to become a sanctuary for extremists. That’s why my administration has been working on improved vetting procedures, and we will take new steps to keep our nation safe and keep out those who will do us harm” for which he received roaring applause from Republicans.

Lastly, Donald Trump stated that his administration will work to reform the current system of low-skilled immigration to a merit-based system. Striking a conciliatory tone, Trump ended his remarks on immigration stating, “I believe that real and positive immigration reform is possible, as long as we focus on the following goals:  To improve jobs and wages for Americans; to strengthen our nation’s security; and to restore respect for our laws.  If we are guided by the wellbeing of American citizens, then I believe Republicans and Democrats can work together to achieve an outcome that has eluded our country for decades.”

Although Trump’s overall message on immigration was generally conciliatory in nature, Donald Trump continued to perpetuate the narrative that undocumented immigrants are criminals, that they take away jobs from Americans, lower wages, and are a burden on American taxpayers. At one point in his address, Trump told the story of an American woman whose teenage son was “viciously murdered by an illegal immigrant gang member” that had just been released from prison, to paint a stereotypical picture of undocumented immigrants as “violent criminals” when in reality these instances are rare and isolated.

This narrative is obviously wrong. Immigrants have made substantial contributions to the United States economy, and highly skilled immigrant workers are a vehicle for innovation and entrepreneurship. In addition, there is evidence that shows that foreign born immigrants are less likely to commit criminal acts of violence than native born Americans. The most positive aspect of his address was his recognition of the need for immigration reform.

Unfortunately, Trump’s proposal to move to a merit based immigration system underscores the importance of our family-based immigration system, the need for low skilled workers to fill a legitimate need of employment, and the need to attract entrepreneurs. Trump made clear that above all, immigration enforcement and border security will continue to be at the top of his administrations goals, and he will continue to portray a negative image of immigrants.

To learn more about the services we offer please click here.