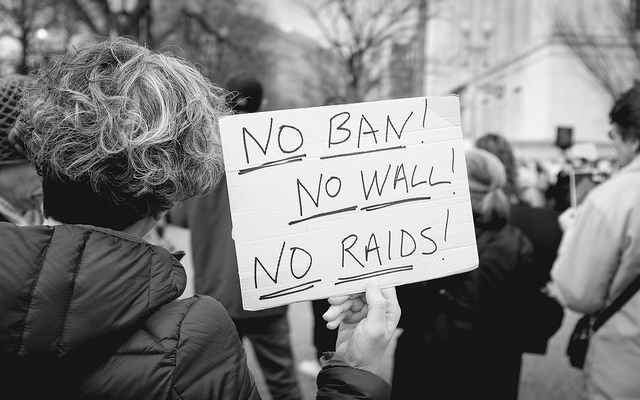 In the United States and across the world, a climate of fear and uncertainty has taken over our day to day lives and crept its way into the politics of the country. This climate of fear has in many ways taken shape because of our President’s harsh anti-immigrant rhetoric, the series of executive orders he has signed on immigration which aim to discourage American companies from hiring foreign nationals, and which ultimately aim to deter undocumented immigrants from attempting to cross the United States border illegally. While the United States has an interest in buying American and hiring American, the President’s stance on immigration has made the best and brightest look elsewhere for the “American Dream.” Another cause for concern is the highly publicized immigration raids taking place across the country against undocumented immigrants. What is perhaps the most unsettling for undocumented immigrants is what is yet to unfold under the Trump administration. In recent weeks, we have seen the President harden his stance on immigration for both undocumented immigrants and foreign entrepreneurs with his plan to dissolve the “International Entrepreneur Rule” and his plan to build a “wall” along the Southern border.

For undocumented immigrants who have lived in the United States for more than 20 years, and who have raised their children as U.S. Citizens, there is much at stake. Living in this climate of fear has become our “new normal.”

The reality is that many families across the country are scared to remain in the United States. Some of these families have willingly returned to their countries of origin or relocated their families to other countries altogether. Still others, are being torn apart. Gone are the days when Dreamers were not made priorities for removal.

If you came to the United States illegally or no longer have a valid status country because you overstayed your visa, or just simply don’t have a status anymore, it is very important for you to take steps to protect yourself, and to realize that you have rights in this country.

What should you be doing to protect yourself?

First and foremost, you must seek a consultation with an immigration attorney to explore your options to legally remain in the United States. Many undocumented individuals are unaware of laws that can benefit them. For example, Section 245(i) of the Legal Immigration Family Equity Act allows certain persons, who have an immigrant visa immediately available, but entered without inspection or otherwise violated their status and are thus ineligible to apply for adjustment of status, to apply for permanent residence and pay a $1,000 penalty.

To apply for 245i at least ONE of the following must apply to you:

Not everyone is eligible for 245i, but many are, and are unaware of this provision in the law.

There are also other alternatives such as prosecutorial discretion and withholding of removal for persons that are in the process of being removed. The point is to be proactive and to discuss any options you may have including your complete immigration history with an immigration attorney. It is best to prepare now in case of immigration raids in the future.

If you have not been filing taxes in the United States as an undocumented immigrant you must be aware that this is a serious violation and will not weigh in your favor in case you are placed in removal proceedings. Remember that even as an undocumented immigrant you may apply for a ITIN (Tax ID number) to file your taxes. Do not under any circumstances continue to evade the laws of the United States and do not seek any state or federal benefits you are not entitled to receive under the law.

Preparing these documents in advance will help you more than you think in the case of an immigration raid or other favorable and unfavorable legislation that may be passed under President Trump in the future.

Take your future into your own hands, and do not let your fear get in the way of planning for your future.

To schedule a consultation please contact our office here.