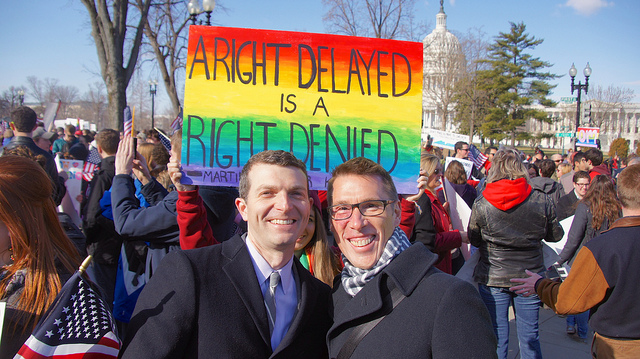 By now you may have heard that on the morning of June 26, the Supreme Court of the United States ruled in a landmark 5-4 decision (Obergefell v Hodges) that same-sex couples have a constitutional right to marriage, a right that cannot be denied by the laws of any state.

In 2013 the Supreme Court made a similar ruling which declared the Defense of Marriage Act (DOMA) unconstitutional. DOMA was initially enacted by Congress in 1996, defining marriage as the union between a man and a woman. DOMA essentially barred the federal government from recognizing same-sex marriages. Despite the ruling, the rights of same sex couples continued to be abridged by individual state laws. Even after DOMA was declared unconstitutional, many conservative states continued to deny same sex couples the right to marry. Due to this, thousands of law suits flooded into the courts to settle the issue once and for all. One of these suits was brought to court by Jim Obergefell, a widower demanding that his legal marriage to his partner of 21 years, be recognized in his state of residency, the state of Ohio. The June 26th SCOTUS decision has now put the debate to rest, though a long journey still lies ahead.

The federal government must work to enforce the Supreme Court ruling allowing same sex couples to marry nationwide. The outcome of Obergefell’s suit will affect the lives of over 200 million Americans seeking marriage equality. Same sex couples can begin the process of applying for Social Security and veteran benefits for their spouses in all 50 states.

What does this mean for foreign nationals who are spouses of American citizens and legal permanent residents? No matter what state you are living in, American citizens and legal permanent residents can apply for immigration benefits for their spouses. Gone are the days when same sex couples would be limited to residing in only those states authorizing same sex marriage. All individuals have now been afforded the same dignity and respect as heterosexual couples.

If you are interested in applying for immigration benefits for your spouse, do not hesitate to contact our office. It is our pleasure to assist you.