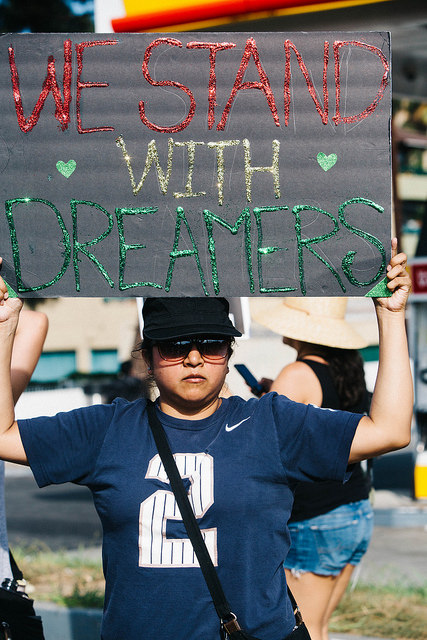 President Trump and Democratic leaders met on Thursday in an unexpected meeting to negotiate the future of the now defunct Deferred Action for Childhood Arrivals (DACA) program, a program that allowed undocumented immigrants, who came to the United States as children, the opportunity to apply for employment authorization and obtain “deferred status” to shield them from deportation. During the meeting, the President made clear that any legislation that would protect Dreamers from deportation would need to make important concessions that would fall in line with the President’s hard line stance on immigration, such as enhancing border security along the Southwestern border, and funding the construction of a wall between U.S. and Mexico.

A day after the meeting, the President denied reports that the he had struck a deal with Democratic leaders, Nancy Pelosi and Chuck Schumer, that would exclude the construction of a border wall between the United States and Mexico, after the duo released the following statement implying that such a deal had been made, “We had a very productive meeting at the White House with the President. The discussion focused on DACA. We agreed to enshrine the protections of DACA into law quickly, and to work out a package of border security, excluding the wall, that’s acceptable to both sides.”

According to the Trump administration, the President stated during the meeting that he would only support legislation to protect Dreamers from deportation, if that legislation included “massive” border security enhancements.” After the meeting, the President tweeted, “No deal was made last night on DACA. Massive border security would have to be agreed to in exchange for consent. Would be subject to vote.”

When asked about the construction of a wall between U.S. and Mexico, the President stated, “The wall will come later. We’re right now renovating large sections of the wall, massive sections, making it brand new. We’re building four different samples of the wall to see which one we’re going to choose, and the wall is going to be built. It will be funded a little bit later.”

The President retracted his previous statement that the wall would come later saying, “No what we’re doing is, we’re doing it in conjunction with the Republicans. We have a very very good relationship with a lot of people. A lot of people want this to happen. They expect to happen and we will see if it happens, but we’ll only do it if we get extreme security. If we get not only surveillance but everything that goes along with surveillance, and ultimately, we have to have the wall. If we don’t have the wall we’re doing nothing.”

When responding about his position on the construction of a border wall, as a precondition to his support of DACA legislation, the President said, “At some point they’re going to have to—they [Congress] cannot obstruct the wall. The wall to me is vital. If I don’t get the wall, then we will become the obstructionist. We have to have an understanding that whether it’s in the budget or some other vehicle, in a fairly short period of time, the wall will be funded. Otherwise we’re not doing anything.”

President Trump made clear that his negotiations with Democratic leaders would not result in amnesty or a path to permanent residency for Dreamers.

In the meantime, 16 Democratic and nonpartisan state attorney generals are pushing back on the President’s decision to end the DACA program by filing a lawsuit in a New York federal court.

Regardless of these developments, DACA recipients whose benefits will expire between now and March 5, 2018, can apply for a final renewal of their DACA benefits. Renewal requests must be received by October 5, 2017.

Read what the President is tweeting about DACA: