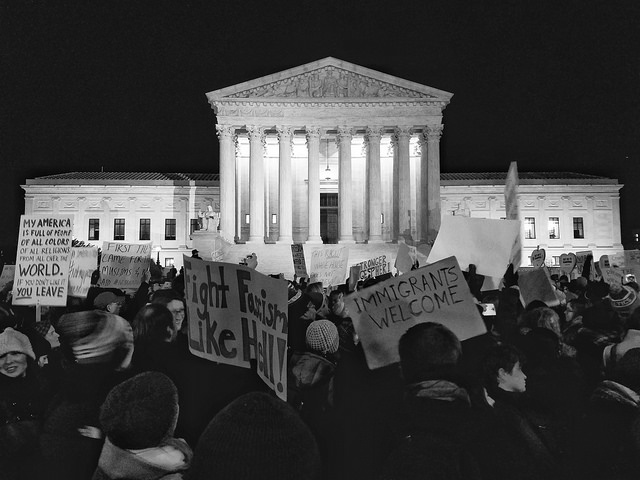 The United States Court of Appeals for the Ninth Circuit has dealt yet another blow to President Donald Trump’s embattled executive order entitled “Protecting the Nation From Foreign Terrorist Entry Into the United States,” an order which temporarily prevented the admission of foreign nationals from six predominantly Muslim countries (Syria, Sudan, Somalia, Iran, Libya, and Yemen) and the admission of all refugees. As previously reported, the case reached the Ninth Circuit Court of Appeals, where a three-judge panel heard arguments against the President’s travel ban, brought by the state of Hawaii as well as other individual Plaintiffs.

In their 86-page opinion, the Ninth Circuit Court of Appeals rejected the executive order on statutory grounds, stating that the President had exceeded his executive power and made an inadequate judgment call with the issuance of his executive order. “The Immigration and Nationality Act (INA) gives the President broad powers to control the entry of aliens, and to take actions to protect the American public. But immigration, even for the President, is not a one-person show,” stated the Court, referring to the nation’s system of checks and balances. The Court added “we conclude that the President, in issuing the Executive Order, exceeded the scope of the authority delegated to him by Congress.” The Court further stated that the President’s executive order is at odds with various provisions of the Immigration and Nationality Act established by Congress, including a provision that prohibits nationality-based discrimination and a provision that requires the President to follow specific protocol when setting the annual cap on admission for refugees. The lower’s courts injunction on the travel ban will remain in place until a decision is issued by the U.S. Supreme Court.

Although the ruling was a victory for immigration advocates, the Court made clear in its ruling that U.S. District Judge Derrick K. Watson of the Federal District of Hawaii erred when he prevented the President, and his administration from conducting internal agency reviews of vetting procedures while the lawsuit was pending. The Court stated that the district court should not have barred the entirety of Sections 2 and 6 of the executive order, and that in doing so the court abused its discretion, thus recognizing that some portions of the President’s executive order were valid and enforceable. The court reasoned that the President should have been allowed to conduct interagency reviews and that it was well within his powers to do so. This was an important concession for the President, because the U.S. government will be appealing the decision to the U.S. Supreme Court, who will review this court’s ruling carefully in deciding whether to uphold or reject the President’s travel ban.

For more information on the President’s executive orders please visit our website.