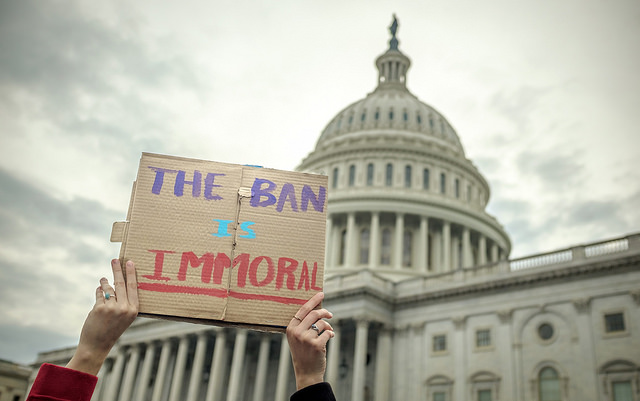 Today in a Seattle courtroom the Ninth Circuit Court of Appeals heard arguments on Trump’s revised travel ban. As you may recall President Trump issued a revised executive order in March to salvage his embattled travel ban, barring the entry of foreign nationals from Iran, Syria, Sudan, Libya, Somalia, and Yemen for a 90-day period and refugees for 120 days. For over an hour, a three-judge panel listened to arguments from the U.S. Solicitor General Jeffrey Wall arguing on behalf of the Trump administration and Neal Katyal, an attorney representing the state of Hawaii and individuals challenging the President’s revised travel ban. The three-judge panel included Judge Ronald Gould, a moderate judge from Seattle, Washington, Judge Michael Hawkins, a moderate to liberal judge from Phoenix, Arizona, and Judge Richard Paez a liberal judge from Pasadena, California. The central question before the court was whether the President’s revised travel ban amounts to a violation of the U.S. Constitution based on religious discrimination.

Moderate Judge Ronald Gould asked, “How is a court to know if it is in fact a Muslim ban in the guise of national security justifications?” Gould questioned whether the court would be justified in continuing to hold the President’s executive order if they found that the order did not amount to religious discrimination under the Constitution.

Judge Michael Hawkins appeared to be the most skeptical judge asking whether President Trump has ever made remarks that he was wrong to issue a Muslim ban, or that his only concern in issuing the ban was to protect national security.  Later during the proceedings Hawkins asked opposing counsel “why shouldn’t we be deferential to the office of the President” however it seems this was a hypothetical question and did not reflect the Judge’s inclinations toward the travel ban.

Attorney Katyal argued that the travel ban was in fact a Muslim ban and that remarks by the President and his administration corroborated that fact. Katyal asked the judges to interpret those remarks as being discriminatory toward individuals of the Muslim religion. The judges responded by asking opposing counsel why the court should not be deferential to the President, and whether the President could ever issue such an executive order that could pass constitutional muster.

The Supreme Court of the United States is expected to hear this case however it will take several months for the case to reach the Court.

This is a developing story. Please check back for further updates.