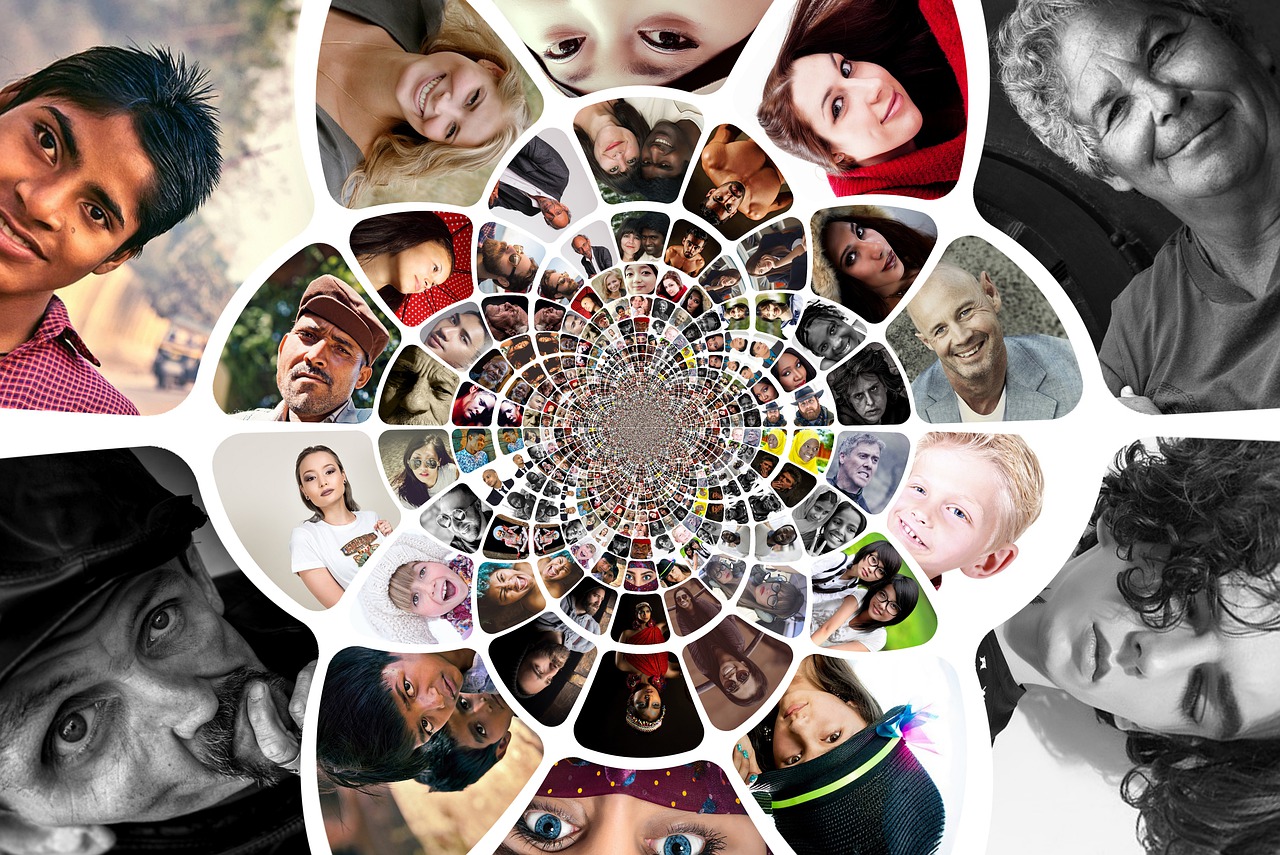 It did not take long for President Trump to capitalize on the terrorist attack which took place several days ago in New York City, to attack the Diversity Visa Program and the process by which US Citizens, and in some cases green card holders, can petition for extended family members to immigrate to the United States.

Following the terrorist attack in New York City, which claimed the lives of 8 Americans, the President fired off a series of tweets calling on Congress to terminate the Diversity Visa Program, claiming that the perpetrator of the attack, Sayfullo Saipov, had gained admission to the United States seven years ago through the diversity immigrant visa program, a congressionally mandated program made possible by section 203(c) of the Immigration and Nationality Act (INA). According to CNN, the Department of Homeland Security has said that Saipov came to the United States in 2010 on a diversity visa. Department of Homeland Security archives confirm that Uzbekistan was a country participating in the Diversity Visa program as early as 2007, and continues to participate in the Diversity Visa Program.

The Diversity Immigrant Visa program is a program enacted by Congress, which allocates up to 50,000 immigrant visas per fiscal year to a special class of immigrants known as “diversity immigrants.” Each fiscal year diversity applicants register for the visa program electronically at no cost. Applicant entries are selected at random through a computerized “lottery” system to allocate the 50,000 available immigrant visas for the Diversity Immigrant Visa Program. Only diversity immigrants who are natives of countries with historically low rates of immigration to the United States qualify for the Diversity Immigrant Visa program. In other words, to qualify for a diversity visa, essentially a green card, you must be a native of a country participating in the diversity visa program. Countries with historically high rates of immigration to the United States DO NOT qualify.

Uzbekistan is, and as far as our research is concerned, has been a country participating in the Diversity Visa Program since as far back as 2007, according to the U.S. Department of State archives. Therefore, Saipov could have entered on a diversity immigrant visa. However, it is puzzling why no evidence has been released by the Department of Homeland Security to corroborate this information, or at least provide more details regarding his entrance. 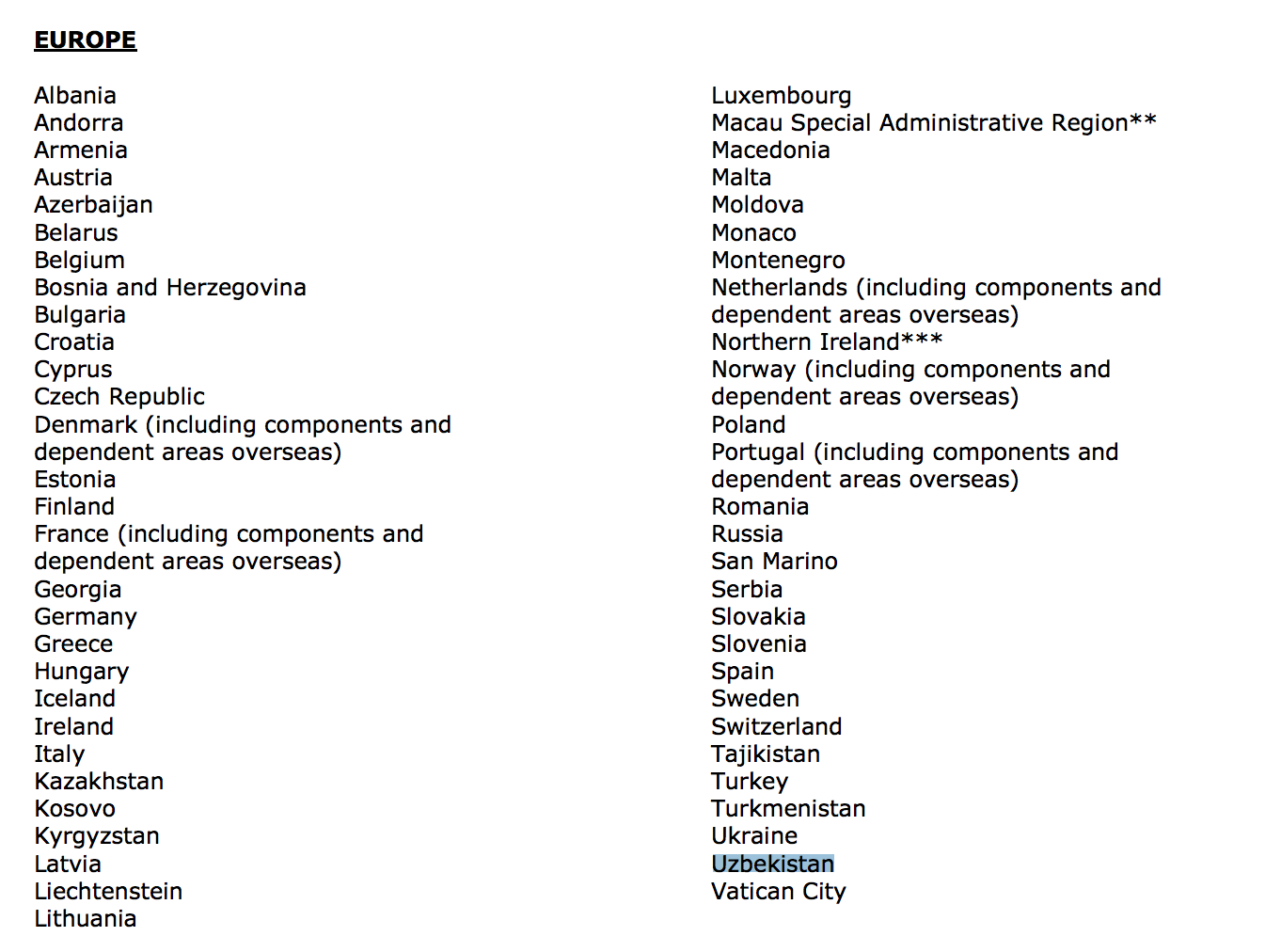 Speaking to reporters the President retorted, “Congress must end chain migration, so we can have a system that is security based, not the way it is now, and we want a system ultimately that is merit based so we can bring in people that can help our country, grow our country, and be safe for our country. We want to select people based on their ability to contribute to our country, not choose people randomly, we have no idea who they are. We’re based on extended family connections. We have people bringing in 24, 25, 26 people when they come in. We have to end chain migration,” adding “the people put in that lottery are not that country’s finest. We know that the program presents significant vulnerabilities to our national security. It is a very unsafe program for our country.”

Having already discussed the impossibility of a green card holder petitioning for 24, 25, or 26 people, we move to the President’s assertion that the diversity visa program is “very unsafe” and that “the people put in that lottery are not the country’s finest.” It is deeply troubling that the President would make such remarks without having any facts to support this statement. Over the years, our office has helped hundreds of diversity immigrants apply for permanent residence through the program. Many of these individuals were business owners in their own countries, physicians, engineers, and the like.

In addition, to qualify for a visa, diversity immigrants must attend a rigorous in-person interview whereby an immigration officer will assess the immigrant’s admissibility to the United States, and their qualifications. Applicants are also vetted for any criminal history, using fingerprints obtained by USCIS during the biometrics appointment. During the interview, the officer has an opportunity to probe the applicant regarding their criminal history. If the beneficiary has been arrested, the beneficiary is required to provide copies of all arrest records. The beneficiary must also present a medical examination, and supporting documents to prove that they possess the minimum academic or qualifying work experience to qualify for the diversity immigrant visa. There is simply no evidence to suggest that current safeguards for the program are inadequate. Moreover, Saipov was radicalized after he entered the United States, not before. An immigration officer could not predict his future actions.

Lastly, in regard to chain migration the President said, “We will be asking Congress to start working on that immediately. There are bills already about ending chain migration. We have a lot of good bills in there. We are being stopped by Democrats, because they are obstructionists, and honestly, they don’t want to do what is right for our country. . . We are going to get rid of this lottery program as soon as possible. He came in through the Diversity program as you know and we are going to stop that. We are going to as quickly as possible get rid of chain migration and go to a merit based system.” The President has said that he will call upon Congress to implement immigration reform that focuses on admitting only highly skilled foreign nationals based on a point system that takes into account the individual’s education, specialized skill sets, employment experience, language proficiency, and age, and eliminates the family-based immigration system.

The problem? Our employment-based immigration system already awards visas based on merit. For example, the H-1B work visa is awarded only to highly skilled individuals who possess a Bachelor’s Degree in a specialized field or its equivalent. Take another example: The O-1 visa is awarded to foreign nationals of extraordinary ability and like the H-1B creates a path to permanent residency. The merit-based system Trump envisions is already in place, however highly skilled individuals holding these visas must go through a slow and outdated process to obtain a green card. This area of the law certainly needs improvement.

As it relates to “chain migration,” as we have already mentioned, immigrant visas for extended family members of US Citizens and green card holders, are limited and subject to backlogs as imposed by numerical limitations. Only immediate relatives of US Citizens receive permanent residency on an immediate basis meaning that their visas are not subject to numerical limitations.

We fear that the President’s remarks are not well-founded in the law, and are representative of a President who does not understand the immigration system currently in place, and who frankly does not care to understand how it truly works. The President is simply trying to appease his conservative base by acceding to their demands.

See what the President is tweeting about immigration 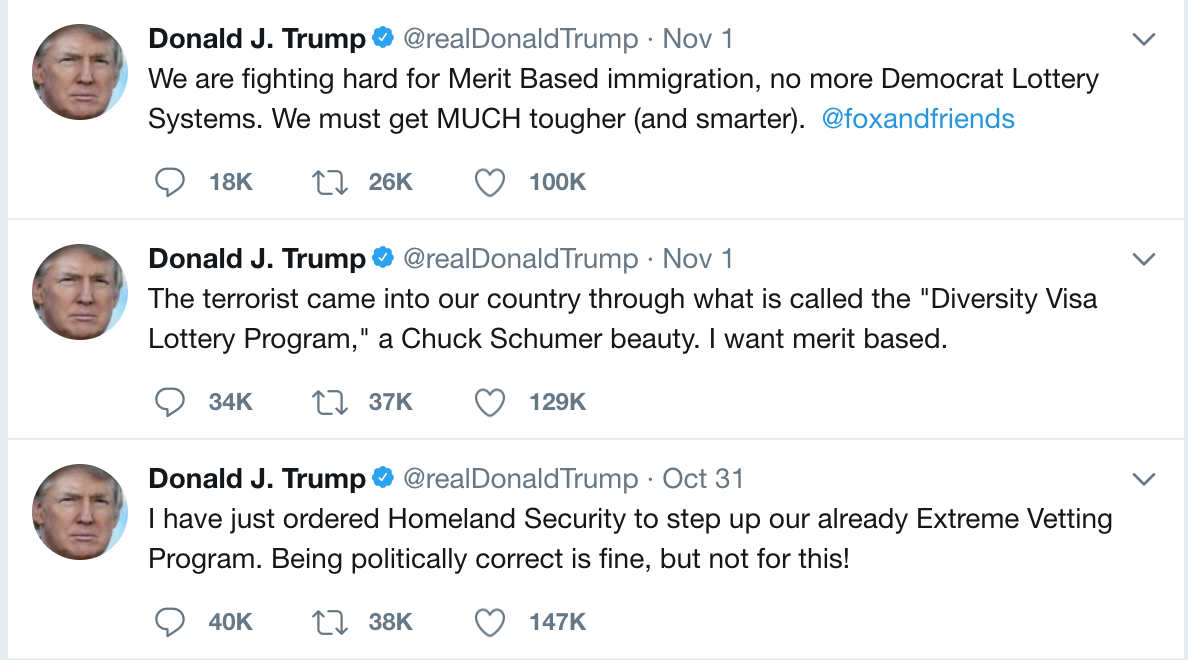 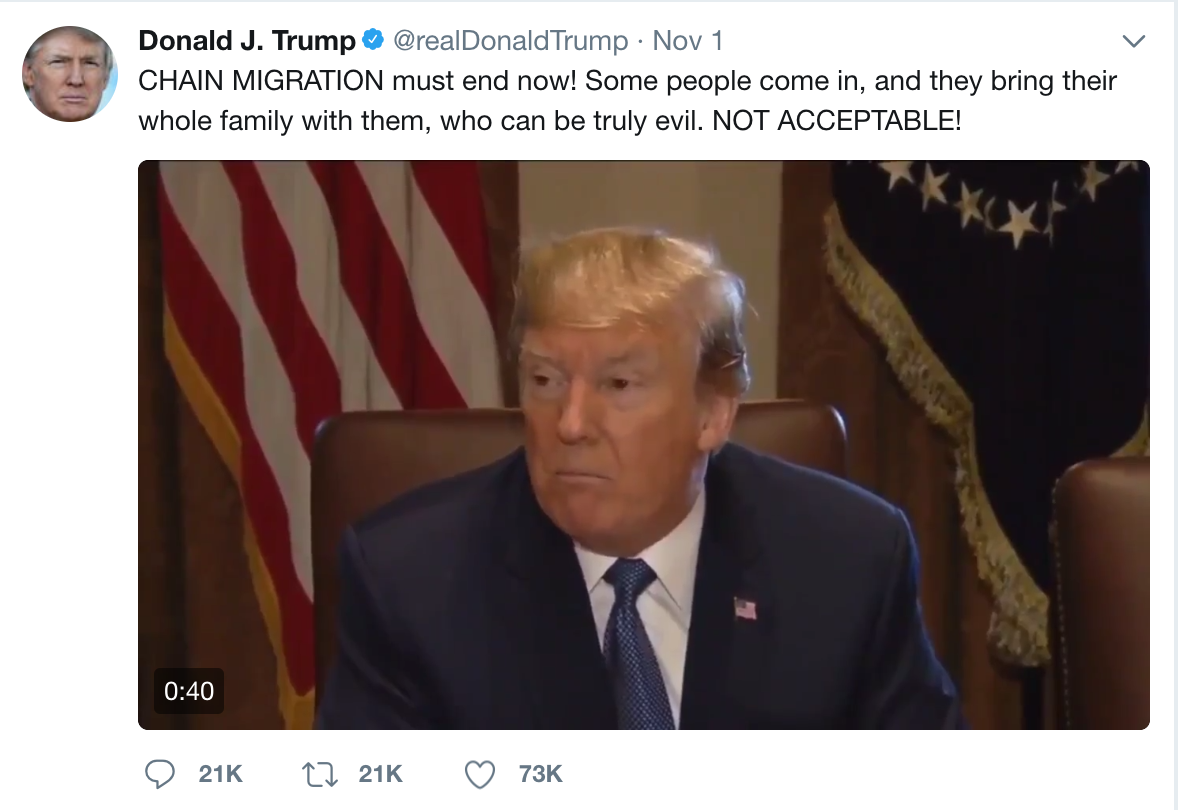 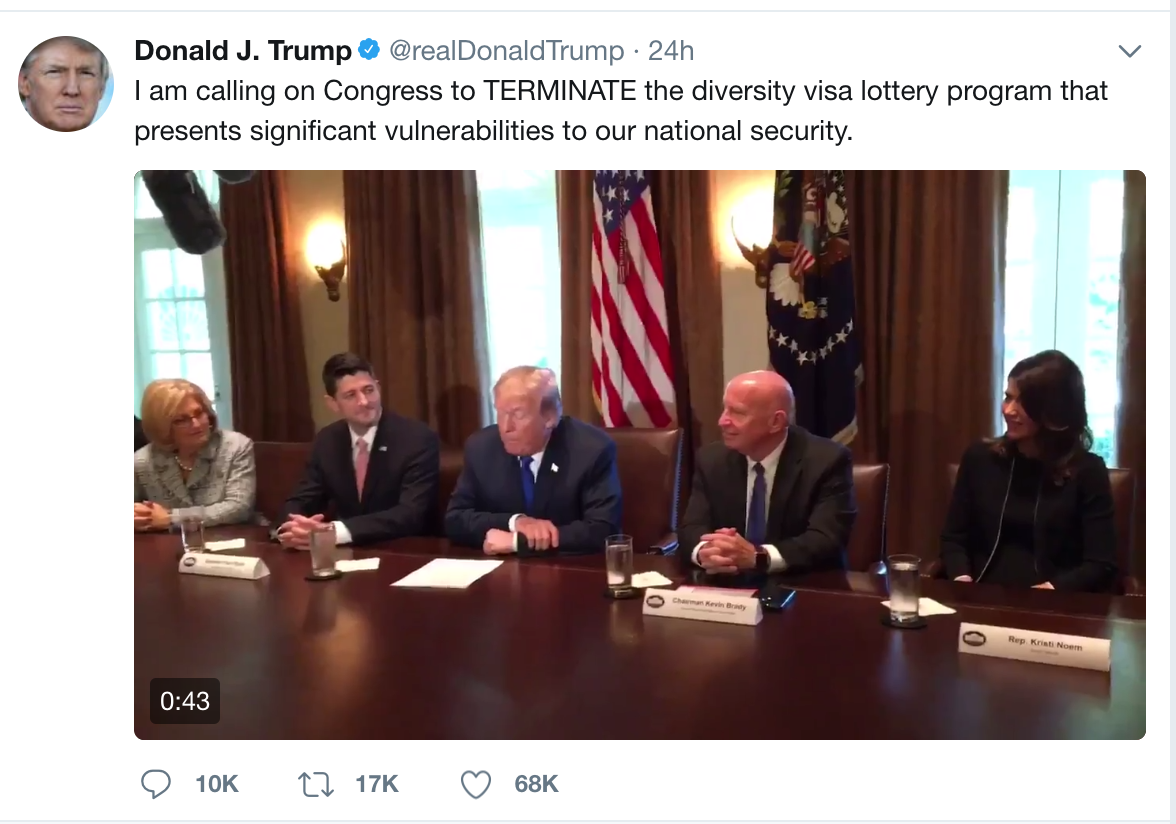