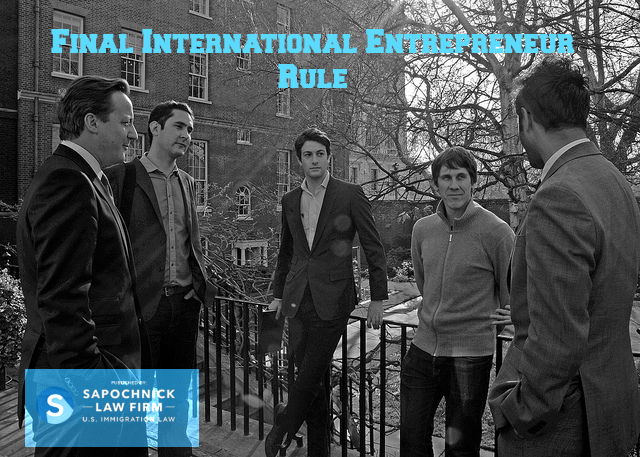 It is our pleasure to announce that USCIS has now published the Final International Entrepreneur Rule in the federal register. The final rule is estimated to benefit approximately 2,940 foreign entrepreneurs on an annual basis beginning July 17, 2017. The rule will make it easier for eligible start-up entrepreneurs to obtain temporary permission to enter the United States for a period of 30 months, or 2.5 years, through a process known as “parole,” for the purpose of starting or scaling their start-up business enterprise in the United States. The foreign entrepreneur’s stay may be extended for an additional 30 months to allow the entrepreneur to continue to oversee and grow their start-up company in the United States. The decision about whether to “parole” a foreign entrepreneur under this rule will be a discretionary determination made by the Secretary of Homeland Security on a case-by-case basis (INA Section 212(d)(5), 8 U.S.C. 1182(d)(5)).

The goal of this final rule is to encourage foreign entrepreneurs to create and develop start-up companies with high potential for success in the United States, and enhance economic growth through increased capital spending and job creation.  Under this rule “parole” will be granted to eligible entrepreneurs who can demonstrate that their company’s business operations are of significant public benefit to the United States by providing evidence of substantial and demonstrated potential for rapid business growth and job creation. Such demonstrated potential for rapid growth and job creation may be evidenced by: (1) significant capital investment from U.S. investors with established records of successful investments or (2) attainment of significant awards or grants from certain Federal, State, or local government entities.

What are the requirements?

Under this new rule, DHS would be able to grant “parole” on discretionary basis to eligible entrepreneurs of startup companies who can demonstrate the following:

The applicant can further validate, through reliable supporting evidence, the entity’s substantial potential for rapid growth and job creation.

Under the final rule, an applicant may be able to satisfy this criterion in one of several ways:

What counts as a qualified investment?

According to the final rule, a qualified investment is one that has been “made in good faith of lawfully derived capital that is a purchase from the start-up entity of equity or convertible debt” Proposed 8 CFR §212.19(a)(4).

Under the final rule, DHS has proposed a minimum investment amount of $250,000. Under the final rule, an applicant would generally be able to meet the investment standard by demonstrating that the start-up entity has received investments of capital totaling $250,000 or more from established U.S. investors (such as venture capital firms, angel investors, or start-up accelerators) with a history of substantial investment in successful start-up entities. The timeframe during which the qualifying investments must be received is 18 months immediately preceding the filing of an application for initial parole.

The final rule provides more guidance on what it means to be a qualifying “entrepreneur.” To demonstrate that you meet the definition of “entrepreneur” you must possess at least 10% ownership interest in the entity at the time of adjudication of the initial grant of parole, and you must have an active and central role in the operations and future growth of the startup entity such that your combined knowledge, skills, and experience will substantially assist in the growth of the business in the United States. Being a mere investor in the start-up entity will not qualify you for parole.

Which start-up companies will qualify?

Start-up Entities that do not qualify

Start-up entities that will not qualify for this program include small businesses that have limited potential to provide jobs and create growth in the United States, created for the sole purpose of providing income to the entrepreneur and his or her family.