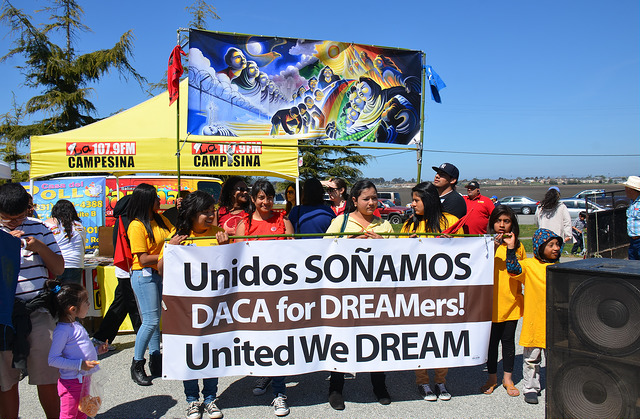 On Friday December 9, 2016, Democratic Senator Dick Durbin of Illinois, and Republican Senator Lindsey Graham of South Carolina, introduced the “Bar Removal of Individuals who Dream and Grow our Economy” BRIDGE act before Congress to protect Dreamers from deportation, and allow them to keep the temporary employment authorization (EAD) they currently possess. This legislation was introduced to provide temporary relief to the young, undocumented, immigrant population that was issued Deferred Action for Childhood Arrivals (DACA) or “deferred status” by President Barack Obama in 2012. Amid mounting pressure to protect the existing DACA program, as well as feelings of fear and uncertainty surrounding the future of the program, several Democratic and Republican Senators have come together to save the program from the Trump administration including Senators Dianne Feinstein, Lisa Murkowski, and Jeff Flake. As you may remember, DACA was first introduced by President Obama in 2012 to provide undocumented immigrants who came to the United States at a young age, the opportunity to apply for employment authorization, and be protected from deportation. DACA is not a form of amnesty, and does not provide a path to permanent residency or citizenship. DACA recipients, commonly referred to as “Dreamers” in the media, are undocumented persons who came to the U.S. as young children, and are pursuing the American Dream through higher education or military service in the United States.

Last week, just before Congress went into recess before the winter holiday, Senator Graham along with other Senators introduced the “Bar Removal of Individuals who Dream and Grow our Economy” (BRIDGE) act which will give current DACA holders “provisional protected presence” for a three year period, as well as undocumented persons who are eligible for the program, but who have not yet applied.  Although this act is not a revelation, given that this “provisional protected presence” sounds a lot like “deferred status” which DACA has already conferred upon DACA recipients, the legislation does promise to protect this population of undocumented immigrants from deportation, and allow them to continue living, working, and studying in the United States without the need to fear deportation. The criteria will also be the same as the eligibility criteria for the DACA program. At the very least this piece of legislation if passed, will protect current DACA holders from losing the temporary employment authorization they already possess, and will shield young undocumented people who would otherwise be eligible for the program, from deportation under the Trump administration.

This legislation was introduced with the goal of protecting a vulnerable population that will be at risk of enforcement for deportation during the Trump administration. The BRIDGE act does not provide permanent protection to DACA recipients, but it does provide a bipartisan answer to the question of what the future of DACA might look like, and what fate will befall the nearly 800,00 young undocumented DACA recipients. The bill however is still only a temporary reprieve and the protection would last only 3 years, should the bill become law. This bill is not meant as a replacement for comprehensive immigration reform. Efforts to punish for immigration reform will continue to be seen in the new year.

The introduction of BRIDGE signals that we may not be seeing the end of the DACA program after all. Thus-far, Democrats and Republicans alike have come out in support of the legislation, despite Donald Trump’s pledge that he would be terminating the program upon his inauguration. Since his election, Trump has dramatically scaled back his anti-immigration rhetoric and instead has said he would be willing to “work something out that will make people happy and proud” regarding the future of DACA. Democrats are hopeful that Donald Trump will have a more sympathetic attitude toward the plight of undocumented immigrants and their children. It seems that the main issue that Republicans like Donald Trump had with the DACA program, and President Obama’s 2014 executive actions on immigration, had more to do with their anger regarding how these programs came about, rather than the programs itself. Republicans have long resented President Obama for passing these programs on his own, without the authorization of Congress. Many Republicans felt that in passing DACA, and the 2014 Executive Actions on Immigration, President Obama was over-stepping his presidential power. It would be difficult to argue with the legitimacy of these programs if Congress had passed them in the first place. This new bill will present Republicans in Congress with the first opportunity to respond to the issue of DACA and the future of Obama’s executive actions. Ultimately, the BRIDGE act cannot pass without the support of Republicans in Congress, who currently form the majority in both houses.

In his own separate bill, Republican Senator Flake also introduced a new bill called the SAFE act, which has a component identical to the BRIDGE act, designed to protect the DACA population. However, this bill adds an enforcement provision that would crack down on unlawfully present persons who have been arrested of certain crimes. The main problem presented in this bill is that it requires the mandatory detention of unlawfully present persons, arrested of certain crimes, during the period for which they are under arrest for the local charge by the local jurisdiction. There is no requirement that the person be convicted to be detained, it merely requires that the person be arrested of a “certain crime.” Furthermore, the bill would also require the individual to remain in detention even after the locality’s proceedings are ended. Additionally, the bill would require that people be detained during the time when their immigration proceedings are pending, and mandates that those proceedings be completed within 90 days. This creates fundamental due process concerns. If passed undocumented persons may not have the opportunity to retain counsel and a fair proceeding before immigration court, as the constitution requires. This bill unfortunately added a severe enforcement provision to a bill that would have protected the DACA population.

Before closing for the holiday, Congress also passed a continuing resolution to keep the federal government open until April 28 of next year. That appropriations continuing resolutions bill includes 4 immigration related programs: The E-Verify Program, the EB-5 Regional Center, the Conrad Physicians program, and the special immigrant non-minister religious worker program. These programs will continue in their existing form with no substantial changes until the new year when these programs may be re-authorized. The H-2B returning worker exemption, was not included in the continuing resolutions appropriations bill.

For updates on the BRIDGE and SAFE act please continue to follow our blog.

For information regarding visa requirements please visit our website.