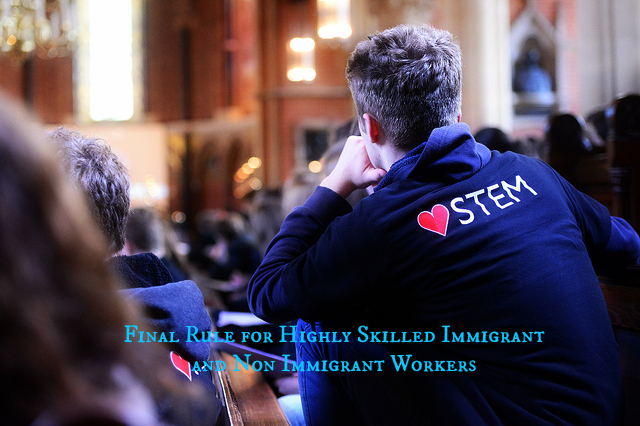 The Department of Homeland Security is expected to publish a final rule tomorrow November 18, 2016 benefitting EB-1, EB-2, and EB-3 employment-based immigrant workers and highly-skilled nonimmigrant foreign workers. The final rule is effective January 17, 2017. The final rule will streamline the process for employment based sponsorship of nonimmigrant workers for lawsuit permanent resident status (LPRs), increasing job portability, and promoting stability, flexibility, and transparency in the way DHS applies its policies and regulatory practices to these programs. These changes were proposed in order to better equip U.S. employers to employ and retain highly skilled foreign workers who are the beneficiaries of employment-based immigrant visa petitions known as Form I-140 petitions. The new rule will allow foreign workers to have more flexibility, and affords workers the opportunity to further their careers by accepting promotions, giving them the freedom of being able to change positions with current employers, change employers, or pursue other employment.

The final rule conforms with longstanding policies and practices in accordance with the American Competitiveness and Workforce Improvement Act of 1998 (ACWIA) and the American Competitiveness in the Twenty-first Century Act of 2000 (AC21). The final rule seeks to further enforce the principles embodied in these pieces of legislation by providing nonimmigrant workers who have been sponsored for permanent residency based on the filing of an I-140 petition, greater flexibility and job portability, while expanding the competitiveness of American employers, boosting the U.S. economy, and protecting American workers. The final rule also clarifies and improves DHS policies and practices outlined in policy memoranda and precedent decisions of the Administrative Appeals Office. The final rule seeks to clarify regulatory policies in order to provide greater transparency to stakeholders. The final rule also clarifies interpretative questions related to ACWIA and AC21.

Amongst its provisions, the final rule clarifies and improves the following policies and practices:

For more information on the services we offer please visit our website.