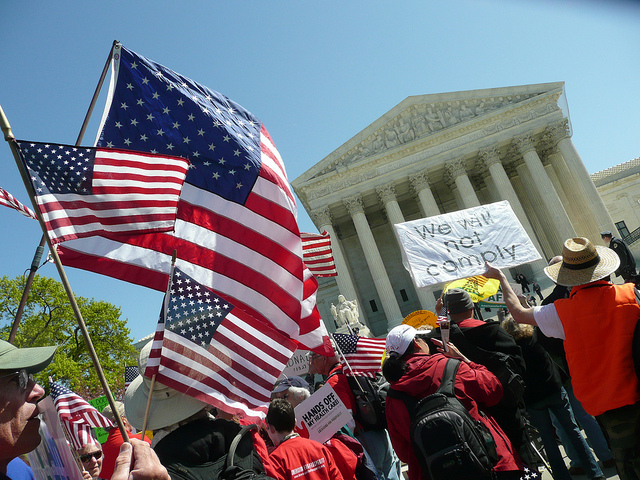 During the last few days, the Supreme Court has been very busy taking up the issue of immigration. On Tuesday in a 5-3 decision, the Supreme Court handed down a controversial ruling strengthening the power of the Trump administration to detain undocumented immigrants facing deportation proceedings for extended periods of time. The Court rejected the opinion of federal judges in California who had previously ruled that detained immigrants facing removal proceedings have a right to a bail hearing after six months in jail.

Today, the Court emphatically disagreed, ruling in the case Jennings v. Rodriguez, that those who face deportation will remain detained while their cases are being considered by an immigration judge. Justice Samuel Alito speaking for the Court said that federal immigration law does not require bail hearings, and that the Ninth Circuit Court has no authority to allow for such hearings.

The Court handed down this ruling after immigrants’ rights activists brought a class action suit representing thousands of non-citizens who had been arrested and held for deportation. Many of these individuals sought asylum in the United States based on a credible fear of persecution. Although the majority of these individuals eventually went on to win their cases in immigration court, they were detained for a year or longer while their cases remained pending. The Ninth Circuit Court of Appeal had previously ruled that such individuals should have a right to a bail hearing after 6 months, and a right to be released from detention provided they could prove to the Court that they are not a danger to the community or a flight risk.

The conservatives on the bench that ultimately reached the final conclusion were Justice Alito, Chief Justice Roberts, Gorsuch, Kennedy, and Thomas, while the dissenters included Justice Ginsburg, Sotomayor, and Justice Breyer.

Justice Breyer railed on the conservatives in his dissent arguing that today’s ruling will impact thousands of people in jail “who believe they have a right to enter or remain in the United States,” adding that “this court, I think for the first time ever, reads a statute as permitting long-term confinement of a person in the United States without an opportunity to obtain bail.”