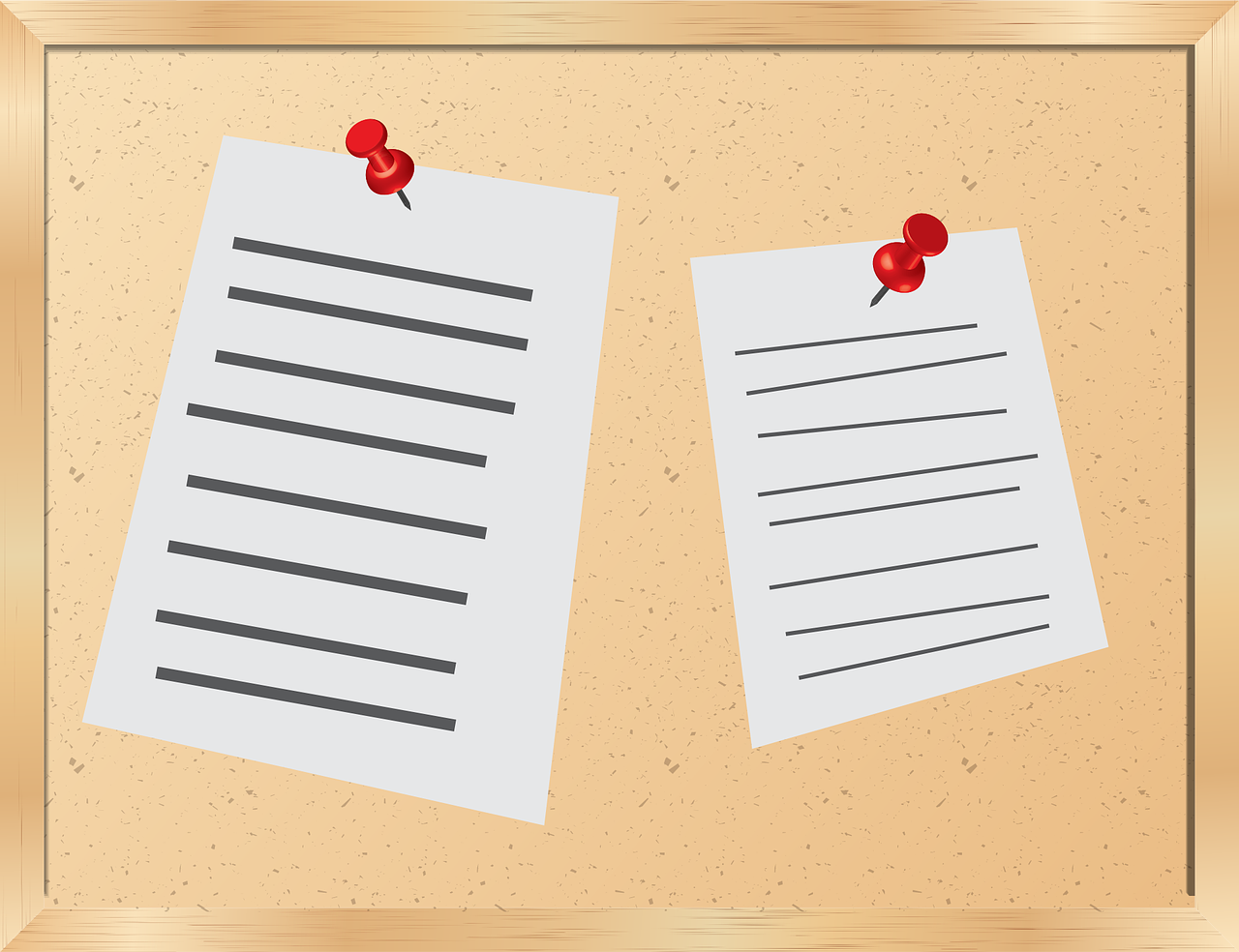 Our office has been eagerly awaiting the release of the October visa bulletin which ushers in the beginning of a brand-new fiscal year. As our readers will know, a lot has been happening in the world of immigration.

Since March of 2020, U.S. Consulates and Embassies nationwide have suspended routine visa services to the public amid the Coronavirus pandemic. To make matters even more complicated, the President issued a series of Presidential Proclamations suspending the issuance of immigrant visas for most family-sponsored preference categories with limited exceptions including spouses and minor children of United States Citizens. In this post we cover the good, the bad, and the ugly of the release of the October 2020 visa bulletin.

THE BAD AND THE UGLY –

For the most part, nearly all family-sponsored categories on the visa bulletin are impacted by the Presidential Proclamations and individuals impacted cannot obtain an immigrant visa at the U.S. Consulate until the Proclamations terminate on December 31, 2020.

What Family Preference Categories are Impacted?

Presidential Proclamations 10014 and 10052 together suspend the entry of and issuance of visas for the following types of family-sponsored immigrants until December 31, 2020:

As you can see these categories make up the vast majority of the family-sponsored preference categories on the visa bulletin. Only very narrow categories of individuals have been specifically exempted from the Proclamations.

Those exempted include the following:

For the few family-sponsored categories that are not barred by the Proclamations, applicants must use the Dates for Filing chart  in the Department of State Visa Bulletin for October 2020 to apply for adjustment of status to permanent residence (except for F2A).

In order to file for adjustment of status based on family sponsorship during the month of October (for applicants lawfully residing in the United States), applicants must have a priority date that is earlier than the dated listed below for their preference category and country of nationality on the Dates for Filing chart (except F2A which must use the Final Action Date chart although this is irrelevant for this month given that F2A is banned under the Presidential Proclamations).

*NOTE: Most of the categories below cannot obtain an immigrant visa as a result of Presidential Proclamations 10014 and 10052.

F1 Unmarried Sons and Daughters of U.S. Citizens:  23,400 plus any numbers not required for fourth preference. 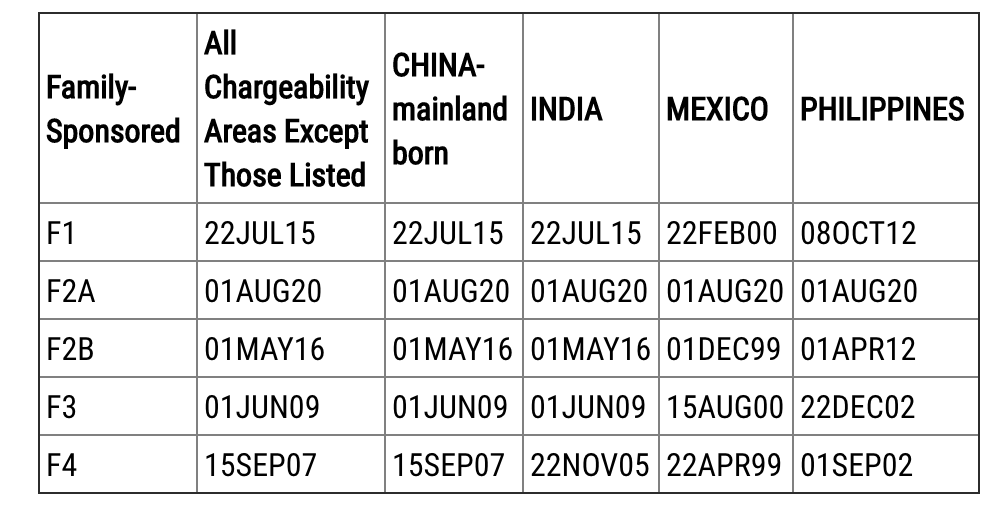 The good news is that with the current “ban” on issuance of visas for most family-sponsored preference categories thousands of visas will be unused. As a result, these visa numbers will not be lost but will instead “roll over” to the employment-based visa categories. This phenomenon has resulted in substantial advances in priority dates for most employment-based visa applicants. For the first time ever employment-based applicants will have the opportunity to apply for an immigrant visa more quickly than ever before. Of course, this will depend on the availability of interview appointments at Consular posts and Embassies worldwide. We are still seeing very slow progression with some Consular posts offering only emergency services at this time.

In order to file for adjustment of status based on employment during the month of October (for applicants lawfully residing in the United States), employment-sponsored applicants must have a priority date that is earlier than the dated listed below for their preference category and country of nationality.

All applicants filing under employment-based preference categories must use the Dates for Filing chart in the Department of State Visa Bulletin for October 2020.

EB-1: All countries current except China and India

EB-2: All countries current except China and India

EB-3 Professionals and Skilled Workers: All countries current except China and India

EB-3 Other Workers: All countries current except China and India

EB-5: All countries current except China 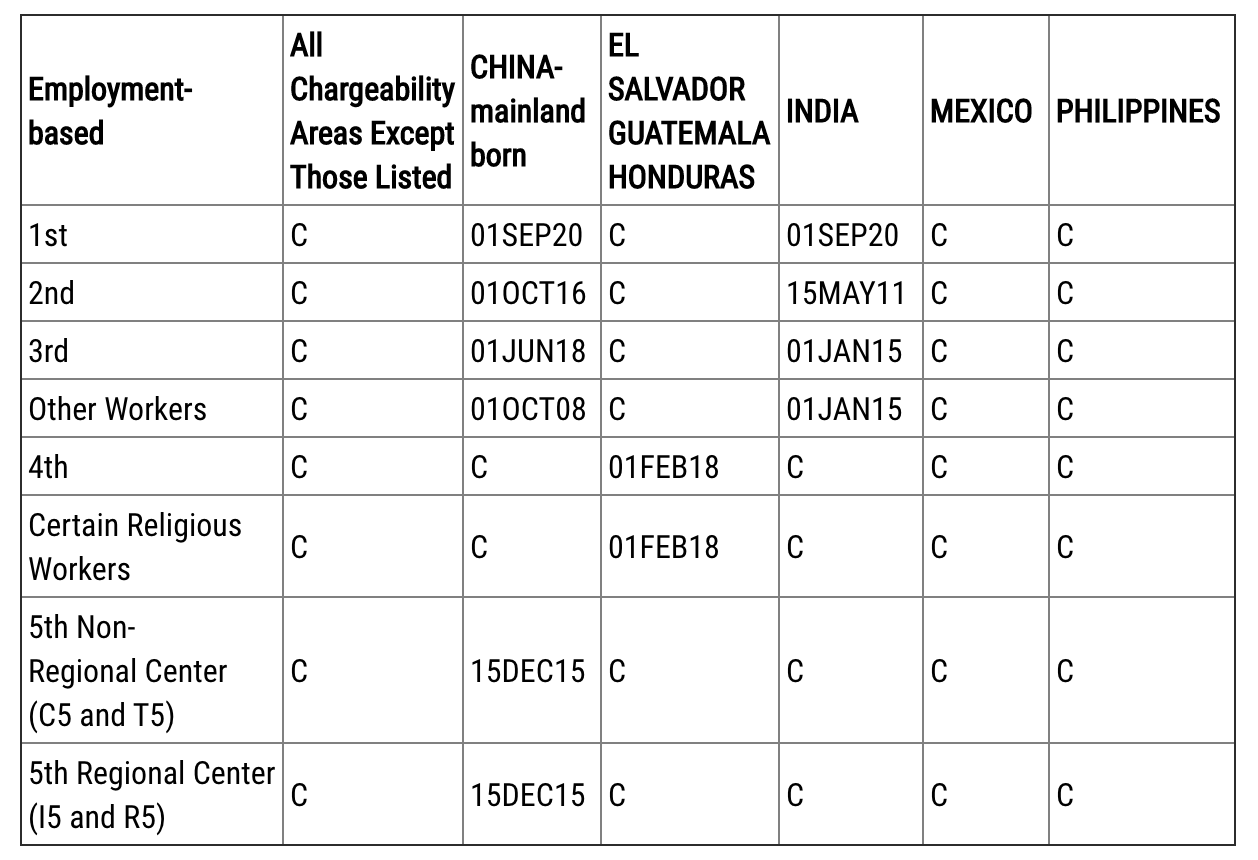 This forward movement has created a huge advantage for employment-based applicants. In the coming months we expect EB-3 to remain current with China and India’s priority dates advancing further. Applicants should keep a close eye on their Consulate’s webpage to be the first to know when their Consulates will resume routine visa services. Regularly monitoring Consular social media pages will also help keep applicants in the know. The forward movement in the EB-3 category also creates an opportunity for employment-based applicants to downgrade their status from EB-2 to EB-3 in order for their applications to be processed more quickly. We will be discussing this possibility in future videos.

Additionally, we believe that as we get closer to the end of the year, there will be a slow but steady advancement for family-sponsored immigration categories as the Presidential Proclamations begin to come to their end. Of course there is the possibility that Donald Trump could extend these Proclamations if re-elected. We will have to wait and see.